Jordan and I finally did another gardening activity together: we started some seeds! It was time to start growing the first of our babies–bell peppers, tomatoes, and jalapenos. (I almost forgot about the jalapenos because they weren’t included in my Sprout Robot schedule! What kind of Robot are you??)

First, we read the back of the seed packets just to be sure there wasn’t anything special, like seed scarification or soaking, that needed to happen. Jordan also read the starting soil bag and later told me to “water gently.” (Success! He’s learning on his own!)

Next, Jordan filled our sterilized Trader Joe’s yogurt cups with the starting soil and I placed three seeds into each container. We decided to start an Orange Bell Pepper plant this week and start a Red & Yellow Bell Pepper in the next two to four weeks so our potential yield will be staggered. We like bell peppers, but not so much that we want three varieties producing at the same time. 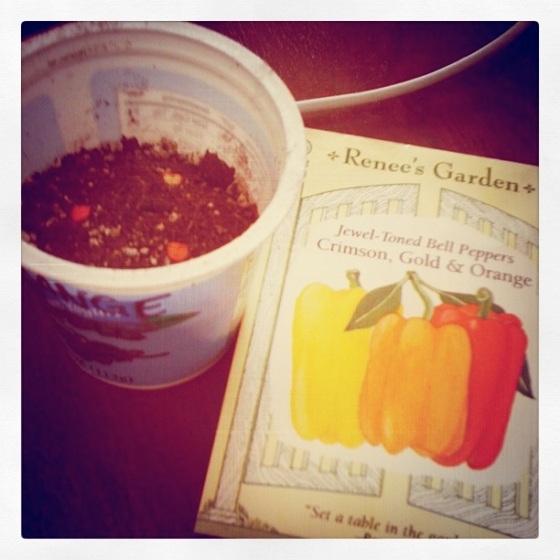 We also planted two cups of jalapeno and tomato seeds. Since we’ll only transplant the healthiest of the seedlings, we thought we might want to try two jalapeno plants and two tomatoes, just in case. I’m actually starting to wonder if we should start another tomato; growing up with an Italian home chef for a mama taught me one can never have enough tomatoes.

After we pushed the seeds into the appropriate depth in the starting soil, we “watered gently” and placed the cups in a plastic container and placed the container in the sunniest spot in our house. Supposedly we should have a fancy grow light for our seeds but we don’t. I’m sure people started seeds indoors before grow lights were invented. We’re just kickin’ it old school. 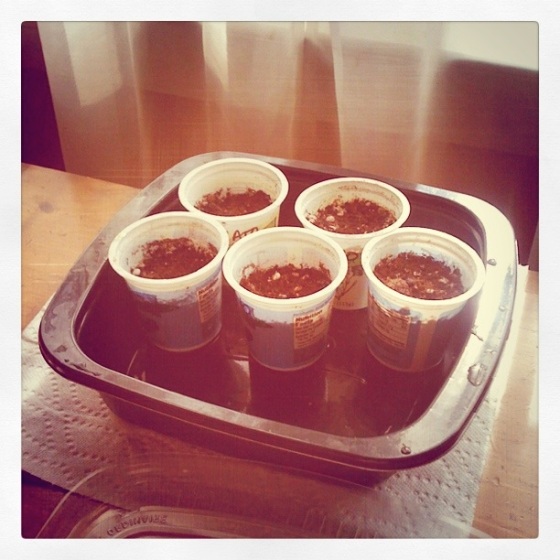 Are we naive to think we can start seeds indoors without a ton of constant light? Will our 20 minutes of seed planting be in vain? Oh, the fears of seed starting!

One of my first steps before planning my garden is to determine my city’s plant/gardening zone so I know what plants and vegetables are mostly likely to survive on my deck. Unfortunately, the Department of Agriculture website and zone map doesn’t take into account my likely irresponsibility, whining, and fear of bugs–this is strictly a map of temperatures.

The big news is that the gardening map was redrawn for the first time since 1990 and on the new map many areas are now in warmer zones reflecting warmer average lows and earlier springs. Charlotte, NC is still in zone 7b (low 5-10°F) but it is right on the border of zone 8a (10-15°F) and this winter the Queen City has been masquerading as a 10a (30-35°F). Not that I’m complaining about the warm winter, but just choose a zone and stay in it already.

An aside: All this talk of winter makes me remember summer. I really don’t know how I will survive gardening in the middle of the summer. I might die. I really might.

The other interesting part of this map is that it actually factors in global climate change (obviously), pollution sources and plant stressors like acid rain, and all the advances in plant technology, of which I am ill-informed.

You can find your gardening zone and the gardening zones of your friends by visiting this link:
http://planthardiness.ars.usda.gov/PHZMWeb/

I suggest spending some time learning about the various zones and then using your obscure knowledge to greet your long-distance friends and family with, “Wow, yeah, the weather’s been brutal in zone 6a this winter, you must really be wishing you live in zone 10b right about now.” Or, “You know, it’s been pretty mild in zone 7b until our zone decided to act like a 4b. Yuck.”